I stopped by my one of my favorite wine shoppes, Wine World of Abingdon, MD.  The store is minutes from me and has been mentioned several times in previous posts.   The wine I was searching for was surprisingly not available.   However, there was no need to be sad or I may have never discovered this gem that was about to presented to me.

It went over my head that they also have beer (and now wine) on tap.  It’s hidden in plain sight near the back of the store.  I’ve walked by there so many times and overlooked what gems may be coming from these pours.

The very friendly staff member they’ve only recently started doing this since August of this year, so maybe I’m not completely clueless to what’s going on.

They had two wines to two try on tap. First was the Not Your Mother’s Merlot, which is a Root Beer Merlot.  I thought it was ok but root beer has never been a favorite of mine.   I think a lot of people will love it.  And it’s fitting for the fall season.

The other sample was their exclusive Pumpkin Spice.   With 12.0% alcohol content is deceptively light and easy to drink.  The sample was glorious and I gladly purchased a growler to go.  The wine itself was barely over $10.00 and there’s a small one-time fee of under $5.00 to purchase said growler.  And it can be re-used to buy future wines on tap at no extra cost, except for the wine itself.  I love the  deal and I adore the concept. 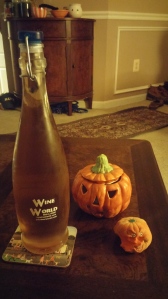 The tint of the wine is picturesque.

The wines on tap phenomenon is growing and I’m seeing the increase in popularity at many restaurants and wine bars.   That’s a post or two at a later date. 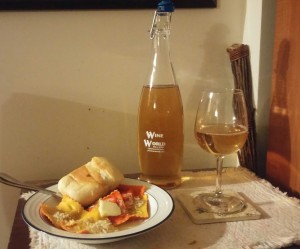 The pumpkin spice wine was a hit at home too.  We had a wonderful dinner planned that included pumpkin ravioli and fresh-baked rolls.  This felt like a triumph.  This seems like such an obvious pairing but it worked.   It may seem like overkill but we’re in the season and the wine and pasta really complemented one another well.

An important fact that my friends and I did agree on is, too much of this wine may not be a good thing.  An overdoing could lead to a headache.  If that’s what you’re looking for then by all means indulge!

This is meant to be drank slowly and reveled in a relaxed pace.   This is something that can be paired with so many autumn meals and sweet treats.  And we know that time is quickly approaching.   Nevertheless, the wine was very enjoyable and is recommended for any fall feast or party.

Upon finishing this bottle I could easily see a replenishing in the offing.