Yes I’m now officially part of this exclusive club.  I got my first ‘Get Stained’sticker from the fine folks at Olney Winery.  And it only took my fourth visit to the Maryland Wine Festival to get there.  Funny how I built something up so significantly for years, and it was all about a sticker.  If you understand the sarcasm, you realize that anyone who wanted a sticker, got one.  But it’s fun to pretend that this is an exclusive group of wine drinkers and lovers of life, that it’s the ultimate badge of honor, and no less than that.  And maybe it is.

So here we go again.  Last year I did three recaps of some of my favorite booth visits at this most exciting of fiestas.  These posts can be found here, here, and finally this gem.

I had no set plan.  I never do.  I could have written two months worth of material from the event but certain scenarios, wine and dinner parties, and holidays steered course.  I love that.  Once again I have material to last me a couple of months but I don’t see it happening on consecutive weeks.  We shall see.  It’s what makes this blog fun.   So before I go on another tangent, I will go with the very first tent I stopped by, the aforementioned, Olney.

At the event itself they only had two wines I had interest in trying, their For Your Eyes Only Cabernet Sauvignon and their X Brothers Pinot Noir.  The former I’ve had before and on a very first taste at their tasting room (more on that shortly) I was floored.  I bought a bottle immediately.  I may have had other wines but this was the standard bearer at the time.

Since then I’ve purchased this same wine at various retailers with mixed results.  Maybe it was a bad batch, bad cork, waiting too long, or the universe telling me not to try it again, but it’s not the wine I remember.   But on this day the recipe seemed different (as every vintage should be) but my palate was rejoicing once again.  This is the Cab I remembered. I see more tannins were added, that oak I remember, and my favorite inclusion of all, pepper was back and with a vengeance.  Oh how I love thee. 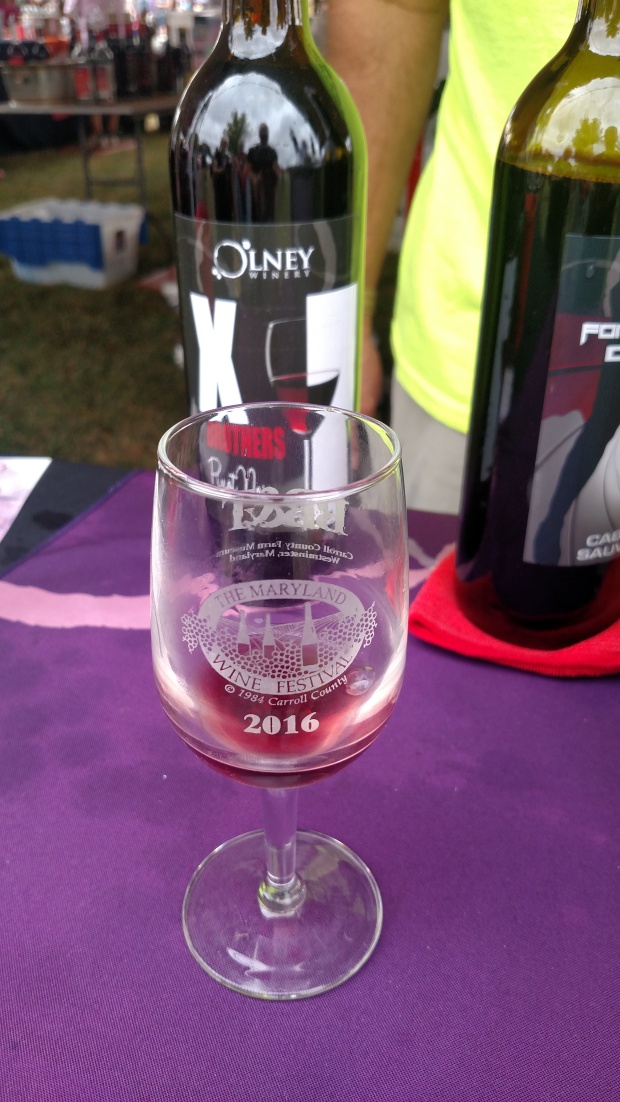 But just when I thought it could’t get any better, the X Brothers Pinot Noir really wowed me.  I almost thing it’s truly difficult to butcher Pinot.  And most are simple, easy to drink, and get the job done.  But this is on another level.   It’s still warm enough outside to have something light yet slightly cooler to appreciate this same bottle all the same. This is a wine for right now, in this moment.  The teases of fruit and spice are a nice segue into fall.  If you like fall.  I have mixed feelings but will make the most of the season where I can.

I would say that we’re done and this was a great first stop at the festival.  I got my sticker and went about my merry way.  Yet I had an inspired thought.  If the opportunity presented itself I would stop by the tasting room, which is near where I grew up and only about an hour away from me now.  I wanted to enhance this post and say thanks in person. 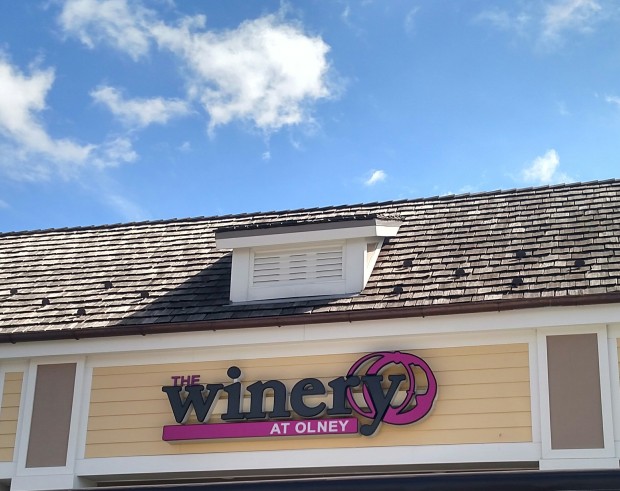 My one and only (Olney?!) visit was a couple of years ago by pure happenstance, or maybe it wasn’t.  Maybe all roads led to this.

Funny because Olney has changed so much since I was a kid.  You can still see the original footprints of a town that has now evolved.  Mom and pops are now chains, more chains are moving in, and the quaintness is there but not like before.  But the tasting room puts gives this town something bold, unique, and inspiring.  Not many places can say they have a winery within a shopping district.  Pretty cool I know.

So what  do you know?  One scenario into another brought me here, and just in the nick of time to put this post up.

A major thank you goes to Bryan who helped conduct the tasting and gave me a few extra pours for free. 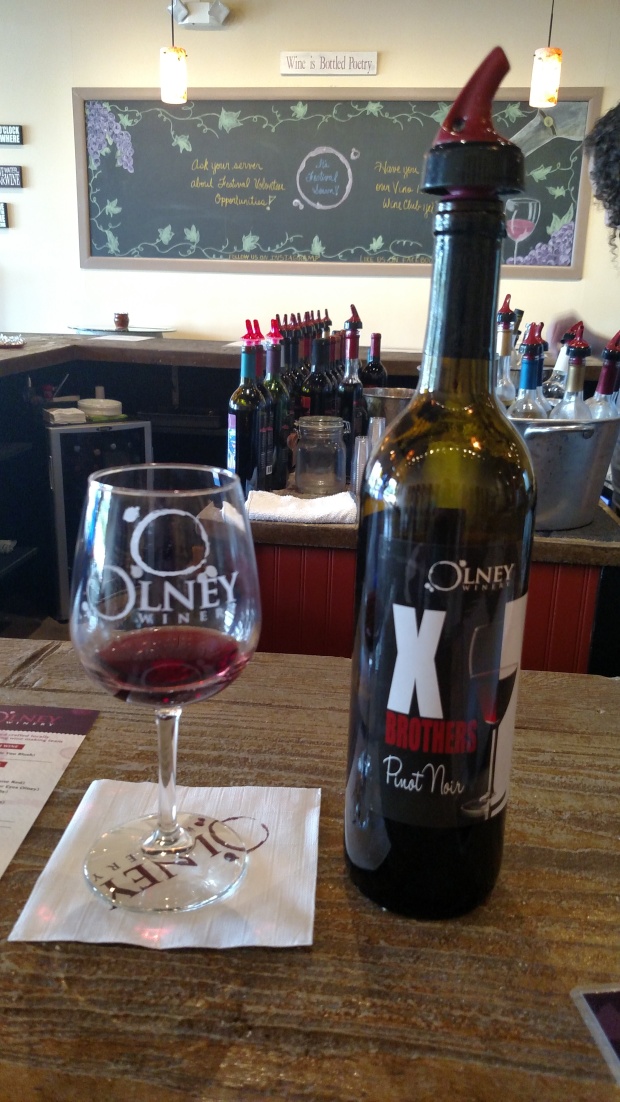 And instead of recapping every wine I had I will expound on another one that blew me away as well.  Yes I was all set to get the Pinot Noir but then the Tuscan Sunset Sangiovese had to rear its beautiful head.  Oh my goodness.  The no-so-subtle hints of strawberry and white pepper were more than enough to make which bottle to purchase a much more agonizing decision than it really needed to be.  But they’re both equal in quality and superiority.

So what did any irrational and indecisive person do? I went with both.  This is one of those times I decided to treat myself.  We need to treat ourselves more, within reason of course.

The Pinot at $19.95 and the Sangiovese at $17.95 will likely be the most expensive bottles I’ll buy this year and for a while.   I’ve always said around $20.00 is where my cut off will be, unless I’m feeling really ambitious.  And the wine has to be immaculate.  Both of these fall under that category at a reasonable price.  As an unexpected bonus, my $7.00 tasting fee was waived.  I hope I don’t get anyone in trouble for mentioning that.

Honorable mention goes to the Olney Mill White Chenin Blanc, which tasted like the tropics with some apple thrown in. 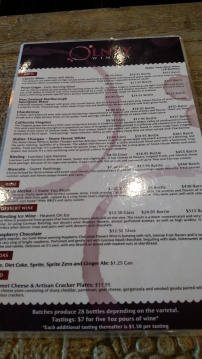 With a couple of exceptions, every wine I sipped went from good to magnificent.  And again, it’s all based on your palate and what you like.  It looks like mine is resuming back to my preference for the dry reds, even if the two I purchased were on the lighter end.  As we progress through the year, the full bodies is the likely scenario. 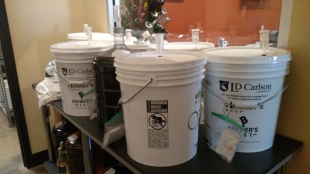 Bryan also gave me a tour of the winery and showed me the fermentation process up close. There’s a strong possibility that this will be revisited in a post late this year/early next year.  I won’t hint at much more than that.  But I may be taking part in something special. 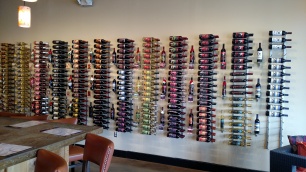 This is a not your typical winery. There’s no vines or even an outside.  Everything is done in-house and it’s a concept that I could see becoming much more popular as time goes on. Yet many of of us, including myself, like tradition.  We like seeing grapes grown and an inspirational patio/backyard set up when we go to a tasting.    I like both, there’s room for both, and there’s room for everyone.  Here’s more information on their concept, their mission, and a brief synopsis of their history. 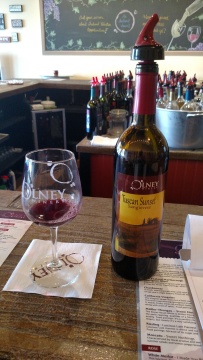 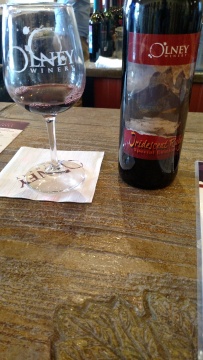 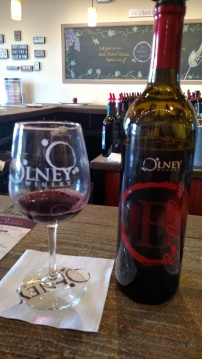 Here’s their contact info and the team of winemakers themselves.  And most important of all, where to find their wine.

Pictures of the various wines and the tasting room itself are all over this post.  Enjoy!

Until next time and there will be a next time here… 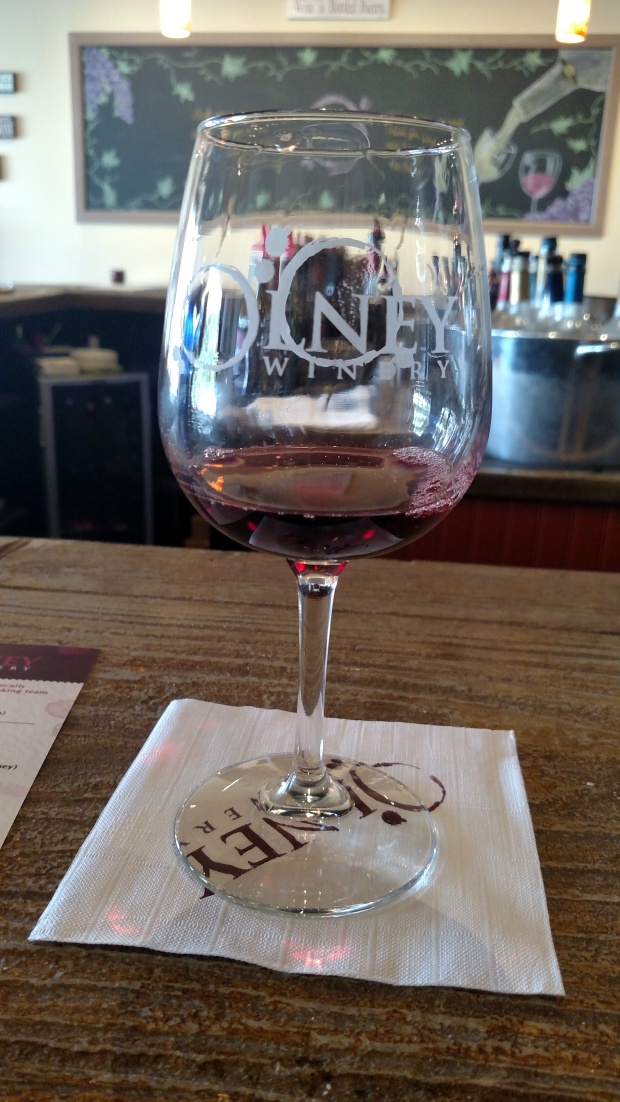 One thought on “Only In Olney”