You don’t need wine to have an awesome gathering.  But it certainly helps.  So does good food.  I mean when was the last time you were with friends, either inside or dining (see!) out, which didn’t involve one or the other, or both.  And you can substitute wine for your favorite adult beverage.   I mean it happens.  Even the most serious of meetings involve something of sustenance.

And so it goes on.  I was invited to a quite gathering of friends recently, and had no idea what I was getting myself into.  I mean I’m close with the hosts, friends with many of the attendees, and I like a peaceful gathering.   The difference is that this was a get together for a show that so many people adore, and up until this event, I had only seen once.   Earlier in the season, I was invited to the premiere of this party, but chose to sit that one out.   For the finale, I think I just wanted to be around friends.

And with friends means food, it means wine, it and it means good times.

I didn’t do any intense research on what wind to bring.  I was told stew was being served, so a medium bodied red wine is what came to mind.  No it’s not quite time to completely switch over to reds, but I will be mixing up the whites, reds, and hopefully a few more Rosé  as well.

In hindsight I’m glad the awkward change of the season lead to an awkward choice of wine.

The 2015 Reserva Malbec Petit Verdot from Oveja Negra is one of those wines that I can’t really get excited for.  I’ve had previous vintages and thought the same ting.  I’ve seen their bottles everywhere, and fortunately have never seen it priced for more than $10, so it does have that going for them.

There’s been gems and beauties that you can find under $10, but I can’t vouch for this one.  Yes there’s a lovely sheep on the label, but sometimes that isn’t enough.  This is coming from an animal lover.   But it’s a different kind of sheep.  Hmmm.. But enough about the label.

This wine is dark. The berries are dark, there’s smoke, there’s pepper, but there might be other things that don’t make this the most welcoming of wines/  It’s simply a wine that you drink, might have it with some food, have another sip, and then you go do something else. 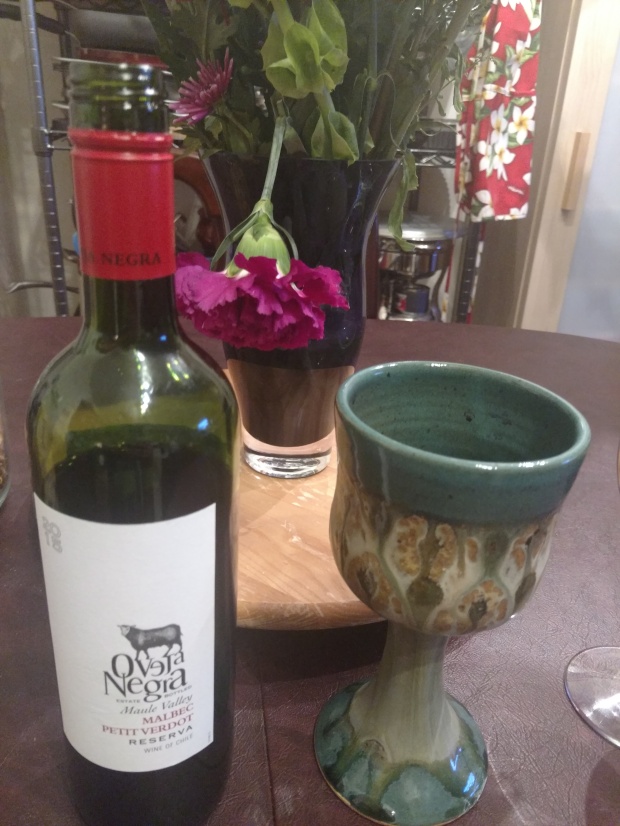 This makes the goblet all the more apropos.

It’s not terrible but it’s not great.  It’s an average wine that won’t offend anyone but I don’t think it will inspire anyone either.

Being around great company will make any wine that much better.  Which tells me that the wine might be even been that much more lackluster when in a much less welcoming or setting of solitude.   It’s a medium to full bodied wine that is missing the components that make a wine stellar.  There’s no length of boldness to it.    I don’t ask for much but this isn’t offering much of anything.

Yet, every now and again I keep seeing this wine and I keep buying it, hoping it’ll inspire and move me in a powerful way.   It didn’t happen this time.  B

But there will always be a next time.

I love my friends, I love my family, and I love good times.  Those mean more to me than any quality of wine.    Well, the good food helps. 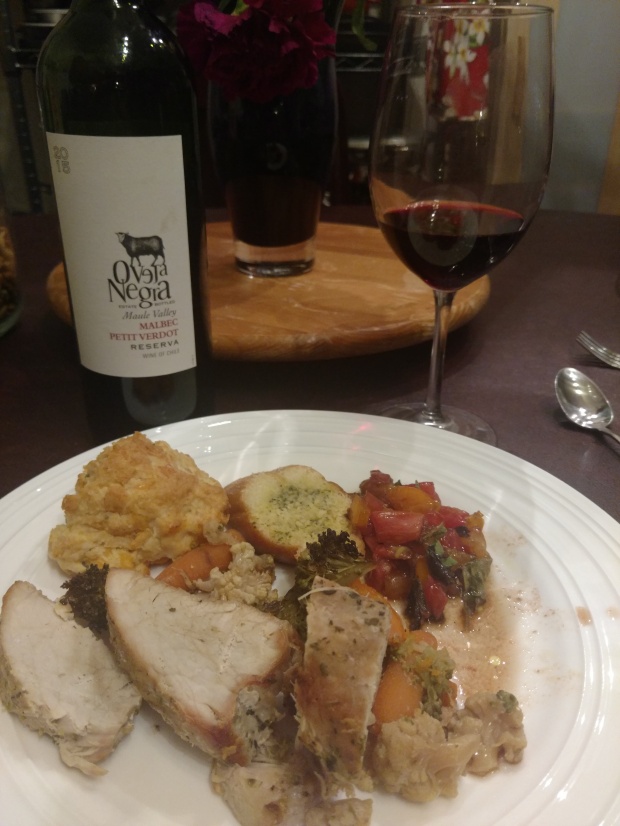 That’s pork and some fantastic side items and foods.  Oh this is yummy. The stew was incredible too, in case I hadn’t already said that.

Old Bridge Cellars is the importer, and they have an easy-to-use link to find this wine near you.

Thanks so much, and hopefully the pending change of the season, leads to some more exciting wines.   My gut tells me yes.

One thought on “Good Friends Gathering”